On March 28, Glytec embarked on its 14th year as an innovator in insulin management. In honor of this momentous anniversary, Glytec has chosen 14 historic moments in insulin innovation that revolutionize the way people manage blood glucose levels today. 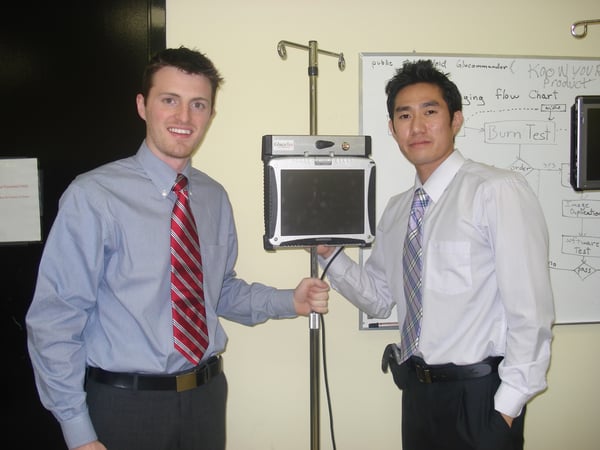 Glytec founder Robby Booth with Nhan Nguyen, with our first generation product. Robby is still leading research and development at Glytec, and Nhan is now part of the product management team.

Sir Edward Albert Sharpey-Shafer discovered insulin was the one chemical missing from the pancreas of diabetic humans in 1910, and just over a decade later, Frederick Banting and his assistant, Charles Best, provided the first real innovation in insulin when they discovered a method to extract insulin from a dog’s pancreas.

1921: Banting and Best used the extracted insulin to regulate the blood sugar of severely diabetic dogs. The two concocted a mix of the extraction and saline before injecting it into the experimental dogs, and the result was a drastically lowered blood sugar level. The team worked feverishly through the end of the year to develop a purified form of insulin in hopes of being able to use it in human patients. As the calendar turned to 1922, they were ready to implement it in a clinical trial.

1922: After testing the experimental drug on themselves to ensure safety, Banting and Best first used insulin on a human with diabetes on January 11. Leonard Thompson, a 14-year-old Canadian boy, had been living with severe diabetes for two years. He had previously been surviving with the calorie restriction diet prescribed by doctors during the era, which limited some patients to just 500 calories per day.1 Thompson experienced immediate results following the insulin injection, and within 24 hours, his dangerously high blood glucose levels fell to near-normal levels.

1923: The success of the trial sent shockwaves throughout the healthcare industry, and a year later, Eli Lilly and Nordisk Insulin Laboratory undertook the process of commercially producing insulin worldwide. The development of an isoelectric precipitation method by August of that year helped usher in purer and more potent insulin with a variation between lots of 10%.2

After the Second World War, insulin management began to shift its focus to consumer product manufacturing.

1949: Becton Dickinson initiated the consumer focus in 1949 when it began producing a standardized insulin syringe. Designed and approved by the American Diabetes Association (ADA), the syringe reduced dosing errors and the associated episodes of hyperglycemia and hypoglycemia.

1955: The next two decades produced landmark advances, and the first occurred in 1955 with the introduction of the first oral diabetes medication. Sulfonylureas, oral agents intended to stimulate pancreatic beta cells to secrete insulin, were first commercially produced in Germany during the 1950s before making their way to the United States over subsequent years.3

1964: The Ames Company developed the first blood glucose test strip, the Dextrostix, using glucose oxidase.4 Available only in physicians’ offices or hospitals, the strip used a large drop of a patient’s blood that was washed away after 60 seconds. The color produced was compared to a chart on the strip’s bottle for analysis of blood glucose.

1970: The 1970s proved to be a transformative time in insulin management, as three crucial innovations were introduced. Ames continued to pioneer the industry in 1970 with the “Ames Reflectance Meter,” the first glucose meter to be used in a doctor’s office. The machine provided the first quantitative blood glucose result outside of a laboratory setting by using reflected light from the surface of a Dextrostix, captured by a photoelectric cell, to produce a reading of 0-4, 4-10 and 10-55 mmol/L.5

1976: The first infusion pumps were invented in 1976 at the National Institute for Medical Research London, as the battery-driven “Mill Hill Infuser” delivered insulin under the skin at a variety of controlled rates.6

1978: More than 50 years after the introduction of insulin, researchers at City of Hope National Medical Center developed the first synthetic insulin identical to human insulin.7 Up until this point, insulin had primarily come from animals; however, Drs. Arthur Riggs and Keiichi Itakura revolutionized diabetes treatment by introducing a human-designed gene to e. coli bacteria. The result caused the bacteria to make human insulin and the scientists’ discovery became the first biologic ever approved by the U.S. Food and Drug Administration (FDA).8

1989: The American Diabetes Association introduced the first Standards of Medical Care in Diabetes, which has been updated annually for more than 30 years and serves as a guide to physicians in the treatment of diabetes.9

21st Century and the Founding of Glytec

The transition into the 21st century has presented several watershed moments in insulin management.

2006: Just over six months after the approval of IV titration in all type 1 patients, on March 28, 2006, Glytec was founded by Robby Booth and Dr. Bruce Bode to identify and provide solutions for insulin mismanagement in the in-patient setting. What started with five employees, one client and a small warehouse space, quickly evolved into an industry leader in electronic glycemic management systems (eGMS). In June 2006, Glytec became the first company to receive FDA, subcutaneous, pediatric and outpatient titration clearance.

2012: After working to revolutionize the field of insulin management for the latter half of the previous decade, Glytec continues its mission in June of 2012 when its patented Glucommander System receives FDA clearance for use with pediatric patients.11 The Glucommander System had previously received clearance in adult patients, and its latest innovation includes the ability to calculate the patient’s initial multiplier based on his/her weight and date of birth.

2018: Glytec surpasses the 100,000-patient threshold. A dozen years after opening its doors with one client and five employees, Glytec provides its glycemic management protocol and services to over 100,000 patients in need of insulin regulation.

Glytec and The Future of Insulin Management

Insulin management has been consistently evolving since Banting and Best first discovered its benefits nearly 100 years ago. The one constant has been embracing innovation in order to provide patients with the best available care.

However, as an industry, we still have a ways to go. One particular area where the industry struggles is eliminating one-size-fits-all, simplistic, insulin protocols (sliding scale) and “pocket-cards” to aid clinicians in deciding appropriate insulin doses for hospitalized patients. For years this approach has been error-prone, difficult to scale, and is not able to be individualized for each patient.12

Roughly 90% of doctors, practitioners and nurses rely on these generic protocols,13,14 despite the American Diabetes Association’s 2020 Standards of Medical Care in Diabetes strongly discouraging the practice.15 This protocol can lead to the overtreatment, undertreatment or mistreatment of hyperglycemia and lead to hypoglycemia.12,16 There is also the potential for catastrophic consequences such as coma, kidney failure, stroke paralysis, sepsis, brain damage, cardiac arrest and death.15 Beyond patient care, severe hypoglycemia is estimated to cost the industry $8 to $14 billion per year.17

Glytec’s eGMS technology, backed by proprietary algorithms and software, has been proven in more than 65 research studies18 as the only solution capable of delivering personalized insulin treatment recommendations from hospital to home.19 Within the hospital setting, studies have shown enterprise-wide utilization at, or above, 95% of eligible patients and annualized cost savings as high as $10,000 per licensed bed.20 Our solutions have served to reduce severe hypoglycemia by as much as 99.8%, 30-day readmissions by 36% to 68% and lengths of stay by up to 3.2 days, leading to overall cost savings as high as $20,000 per licensed bed.21-23

Patients have seen dramatic reductions in hypoglycemia, hyperglycemia, lengths of stay and readmissions.19,20,24

In 2006, Glytec emerged as a startup set on making a positive impact on insulin management. Much like the innovations in insulin, Glytec has adapted over time to provide patients struggling with blood glucose levels safer and more efficient methods for living a normal life. After starting with one customer, Glytec is now used in nearly 300 hospitals and healthcare facilities and has been proven effective in 150,000 patients in 2019 alone.13,14 Glytec continues to write the future of innovation in insulin management with advances in AI-based technology, targeted research and leading advisors from the scientific community.

Thank you for your support over the past 14 years, and here’s to continued innovation moving forward.